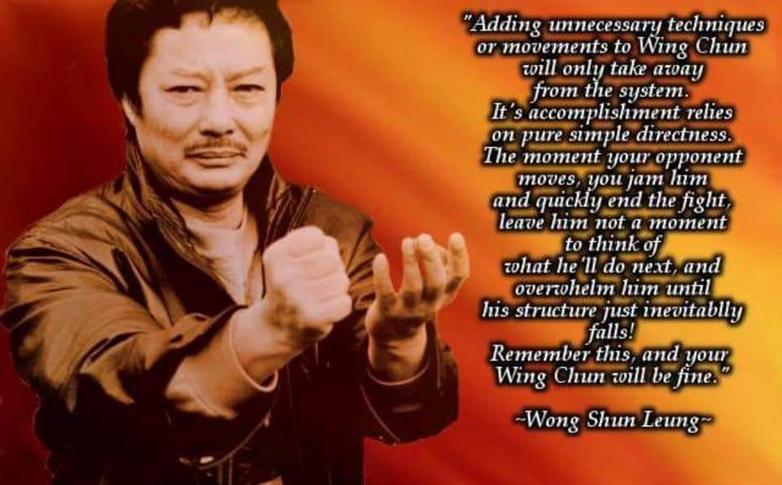 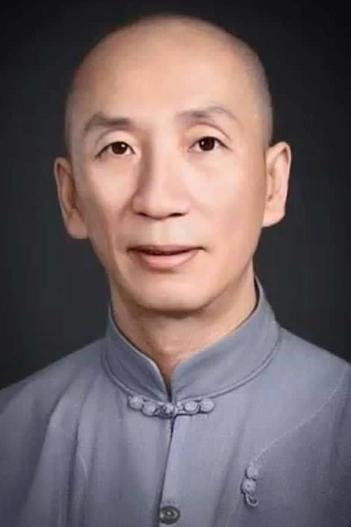 "Our hands and feet may belong to us but they don't always do what we tell them to".
-Wong Shun Leung 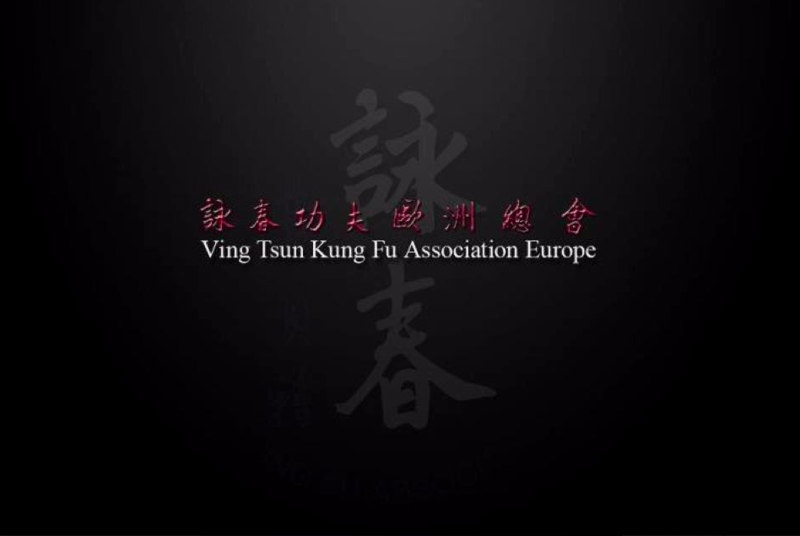 “Basically I teach the same method I learned from Yip Man but I would say that I teach it in a more systematic way..”

“I haven’t changed the principle. The way teach has changed to make it easier for others to understand. If I do make any changes, they are very small, so much so that I can’t remember all of them. Ving Tsun is such a good system, there is almost nothing to correct...”

“I have seen some instructors turn simple things into big mysteries, misleading their students. They not only deceive themselves but other innocent people, too. They’d do better teaching the students how to not make mistakes in real fighting.”

“What counts in real combat is determination, courage, and vigor, if you’re superior in this aspects, then you can often knock down you opponent with two or three simple techniques....”

“I can only say that I try to share Ving Tsun in an honest way. I teach in a logical manner because the art is very logical. I can’t talk about what other people may do or say. I’m only responsible for my own acts.” 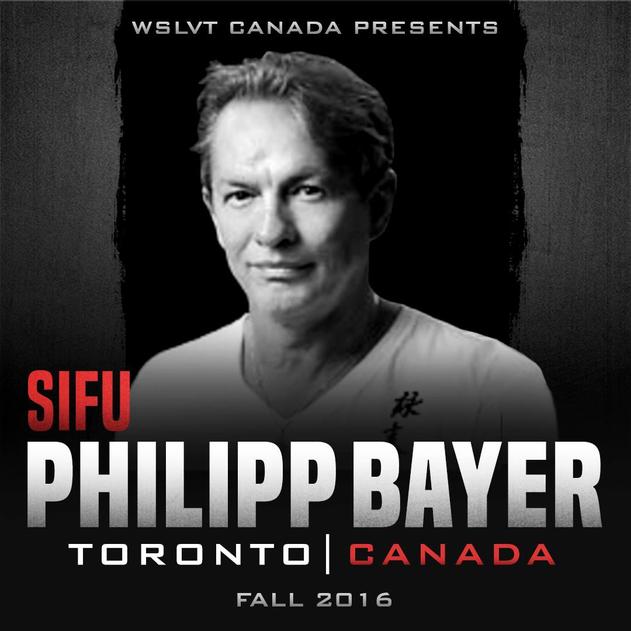 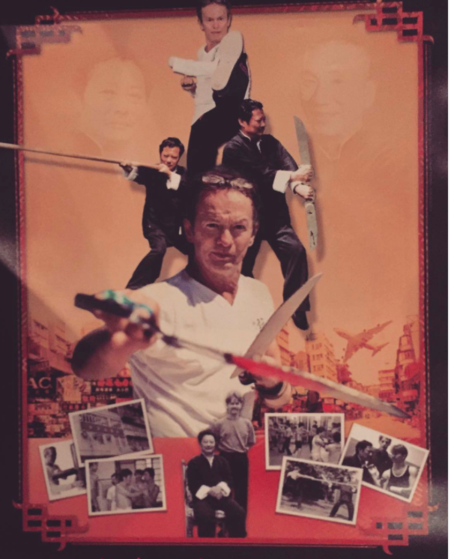 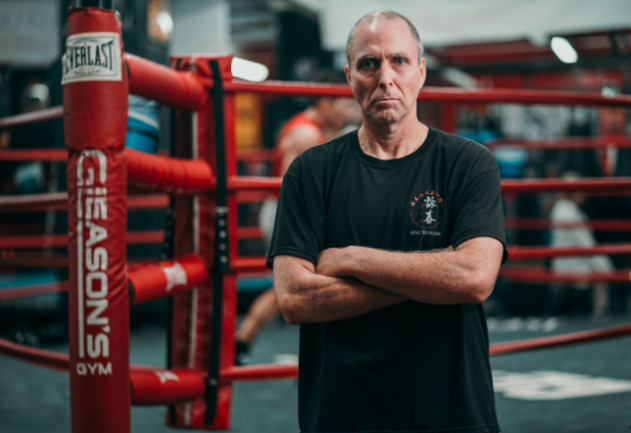 
It has been a very, very busy month for us and The WSLVT Allstar Weekend was a huge success! We made history in Canada, and also in the WSL VT family.
Seeing Sifu Philipp Bayer and Sifu Cliff Au Yeung together was a privilege, and seeing them take the stage was mind blowing.
Witnessing these two fine gentlemen recollect on their past history, and experiences they also shared with their time with the Late Great Wong Shun Leung was priceless. We gained so much insight about the man and his character, and also learned the way that he truly thought about Ving Tsun and his method, first hand by 2 of his senior students.
The WSLVT Kuen Hok Association of Canada presented both Sifu Philipp Bayer and Sifu Cliff Au Yeung with Lifetime Achievement Awards in Preserving, Promoting, and Passing on the traditions of the WSL VT Kuen Hok.

We would like to thank Asiatic Sifu for truly making the impossible, possible.
Thanks goes out to team WSLVT Canada for all your hard work with coordinating the event, it would not have been successful without your help!
To our co-presenters, Wing Chun News and Revolution Wing Chun, we thank you for the tremendous support!

To Kevin Gledhill ( USA ) and the WSL PB VT group from New York, Dave van der Poel ( Holland ), Leandro Spina ( Germany ), Frank Heimanns ( Germany ), and all those not mentioned, that traveled long distances to take part of this event, we thank you and are honored to meet our extended family! 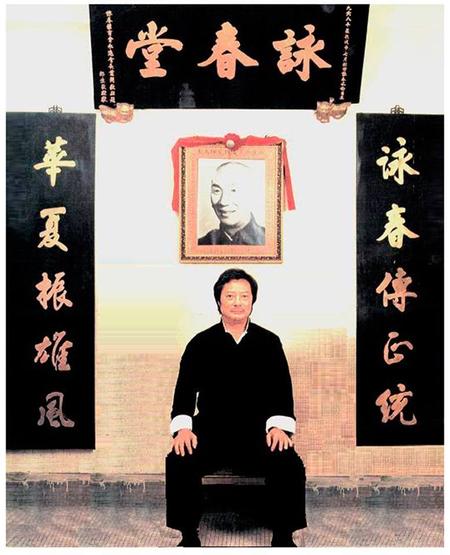 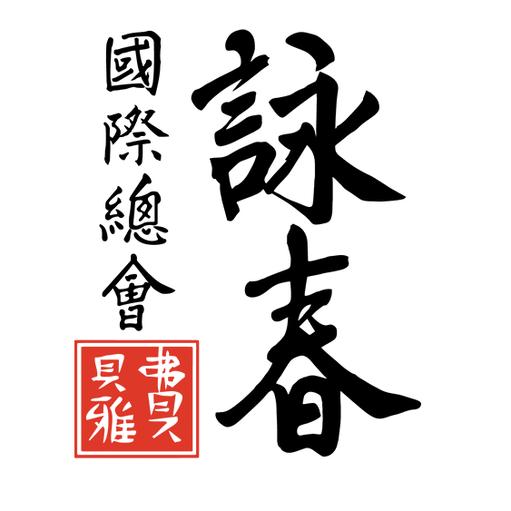 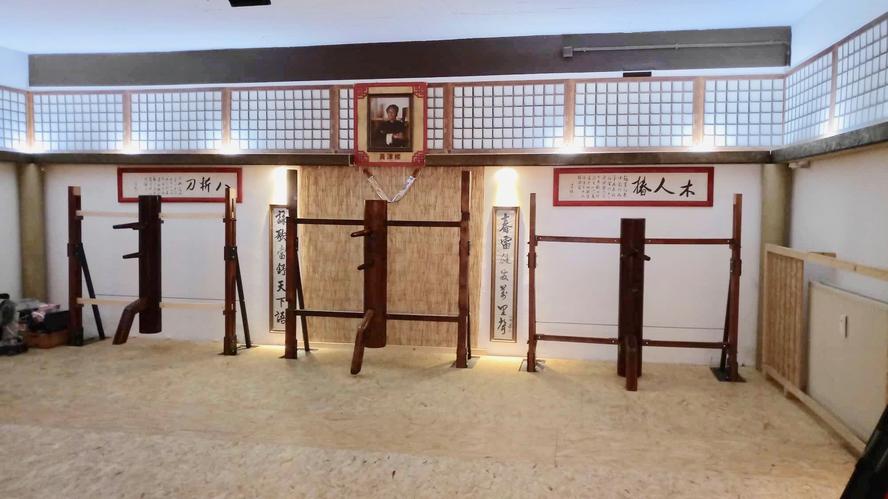 "Everyone has a plan until they get punched in the face."
Mike Tyson 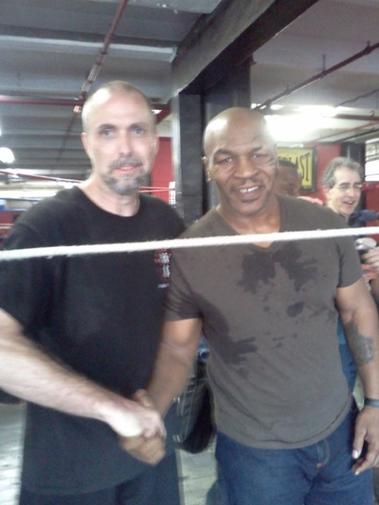 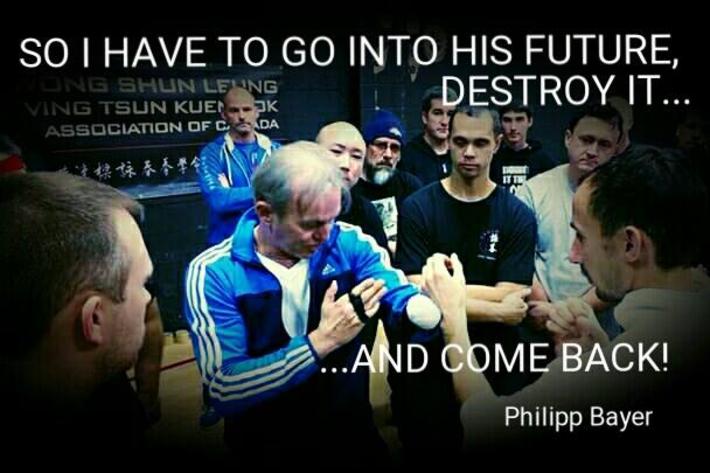 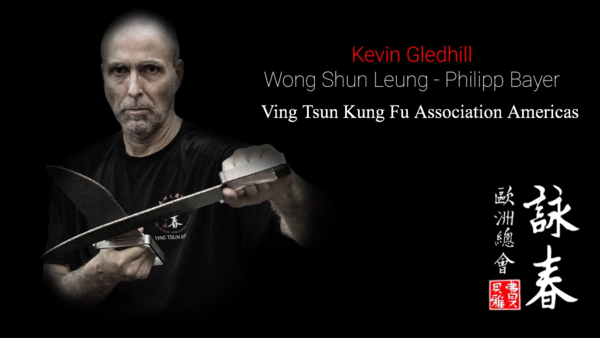 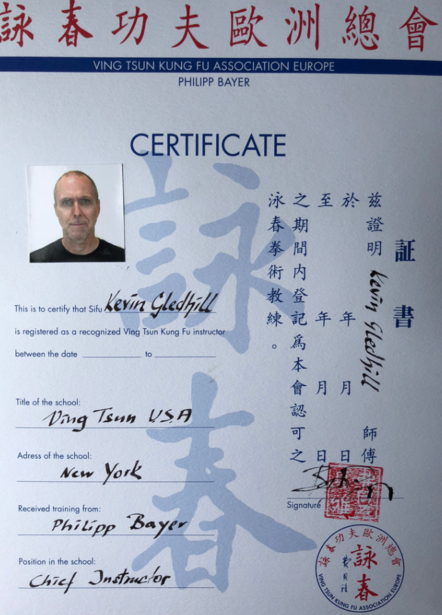 Ah, the famous letter that Bruce wrote to Wong Shun Leung crediting his martial arts to him...signed by the man himself.

To the non-practitioner, here's some information about Bruce and Wing Chun that you may not have known.

Both Bruce Lee and Wong Shun Leung joined Wing Chun through Ip Man. In the traditional Chinese culture, joining a martial arts class was much more than subscribing to a system of fighting, you were basically joining a fraternity/sorority/lineage; a family of fighters who share the same ideologies and training as you. The process in this tradition is called 拜師 (Bai-See). You pour a cup of tea to a master and you accept him as a father figure for life. This is what both Wong and Bruce Lee did under Ip Man.

However, the story is a lot more complicated once it comes to who actually taught Bruce Lee. His real teacher was actually Wong Shun Leung.

Bruce was a child-star in Hong Kong, and a lot of people blamed Ip Man for favoritism because of Bruce's celebrity status. When Ip denied any claims of favoritism, people dug deeper and found out Bruce's mom was part German, so they complained that Ip Man should not be teaching any foreigners Wing Chun. In order to avoid losing his students, he had to stop teaching Bruce. Bruce was also the son of his friend, so he can't deny Bruce's learning. So what Ip Man did was push Bruce Lee off to his student, Wong Shun Leung. Wong was Ip Man's champion student and newspapers/magazines gave Wong Shun Leung the nickname: 講手王 (AKA. King of Talking Hands) due to the amount of martial arts schools that he challenged and defeated. So when it came to the actual instruction of a newcomer like Bruce, Wong was given the responsibility.

Bruce learned his basics with Wong Shun Leung. He practiced his forms, structural and power development, and did drills just like everyone else who did Wing Chun.

Bruce eventually had to move to America to avoid all the trouble he was getting into in Hong Kong.

Coming to the United States, barely a young adult, Bruce was exposed to a wide spectrum of foreign ideas he never witnessed before. There was primarily a lot of Judo, Karate, Tae Kwon Do, and not so much Kung Fu, which Bruce subscribed to loyally. Bruce's work in the industry and the martial arts community is known by the entire world as he brought Kung Fu into it's global golden era in the 70s.

Bruce had an encounter with a guy by the name of Wong Jack Man. After narrowly beating him in a fight (supposedly), Bruce realized some of his shortcomings, which prompted him to blame the system and not himself. He decided that he wanted to implement his own system of fighting, but Wing Chun and Wong Shun Leung left too deep of a mark on Bruce for him to refute in his lifetime. That's why, despite believing that the fighter should be "formless, shapeless, like water", Jeet Kune Do was also dubbed by Bruce to be "The Way of the Intercepting Fist", which is one of the main ideas of Wing Chun.

When Bruce became a globally famous movie star, he actually paid to fly Wong Shun Leung from Hong Kong all the way to Hollywood so that they can catch up and talk about martial arts/film-making. In Wong Shun Leung's visit, Wong and Bruce exchanged a lot on ideologies and fighting. According to multiple accounts, Wong sparred with Bruce, and despite Bruce being able to land just as many hits as Wong did on Bruce, Wong's hits were all a lot more vital than Bruce's (strikes to the eyes, head, throat, etc...).

Wong Shun Leung actually convinced Bruce Lee that he benefited from the years and years he spent training Wing Chun which resulted in his speed and his power (directness and structure), but denying his students of the same training was essentially asking them to jump the flight of stairs that he climbed for years. Bruce Lee's martial prowess was the direct result of Wing Chun. Although Bruce was very talented, he was far too young, and there's even those who said that Bruce Lee would have taken back Jeet Kune Do if he was not as famous as he was.

Years after Bruce's death, Wong continued his Wing Chun journey, eventually teaching Philipp Bayer, which resulted in Philipp spreading genuine Wong Shun Leung Wing Chun all throughout Europe and being the figurehead in the movement. Now, through my teacher and a few of us here, America. 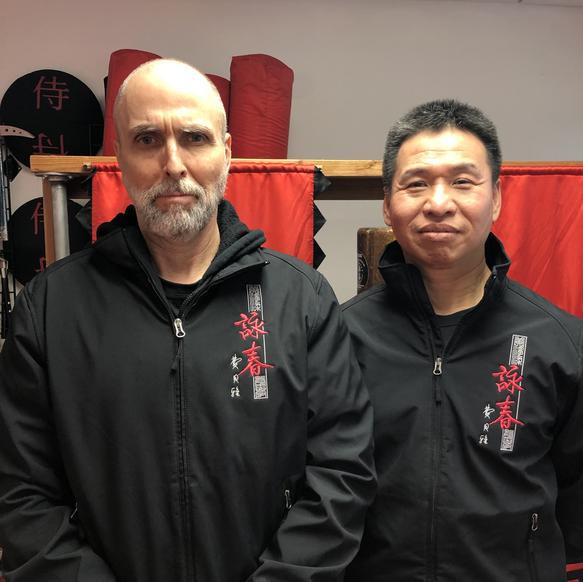 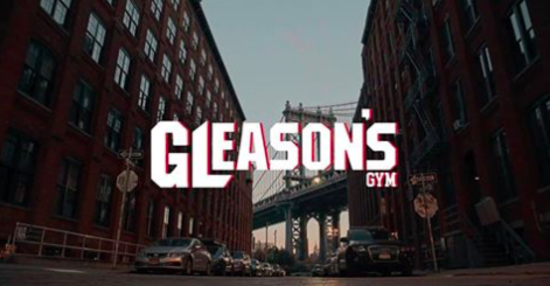 "First of all, people should understand that things are not always an application. You can use applications or exercises to show a person how things work, however, you should never think in terms of applications. The most important thing is that people understand that Wing Chun helps you to create certain behaviour and attributes for fighting."